Plants in general have specific requirements in terms of growing medium, pH, moisture, light, slope, climate and altitude (Ellenberg Values). They and their allies such as fungi may all be classed as ‘indicators’ of a particular set of growing conditions and specific habitat-types, e.g woodland or wetland; areas with high nutrient levels etc. Some have very precise requirements others are more general and able to grow in a range of habitats e.g common nettle.

Botanical Indicators of Ancient Woodland
Lists of plants which have strong associations with known ancient woodlands and can therefore be used as indicators have been developed covering different areas of the country. These lists reflect different growing conditions and historical management across the UK and are still subject to refinement as further data is gathered and interpreted alongside historical and archaeological studies. Woodlands are classed as ancient using the accepted definition ‘in existence prior to 1600’. In the case of Industrial Treescapes there may be only a few indicator species in parts of the wood where industrial activity has taken place. Outside these areas, for example stream-sides and boundaries which have had less disturbance more species may occur. Common ‘indicator’ species in local industrial woodlands are bluebell, wild garlic, wood anemone and dog’s mercury. These can all form carpets of plants covering the woodland floor. 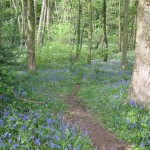 The particular requirements of some plants mean that they can indicate areas of disturbance, industrial processing sites and outlines of archaeological features which may otherwise be difficult to pick up. For example: